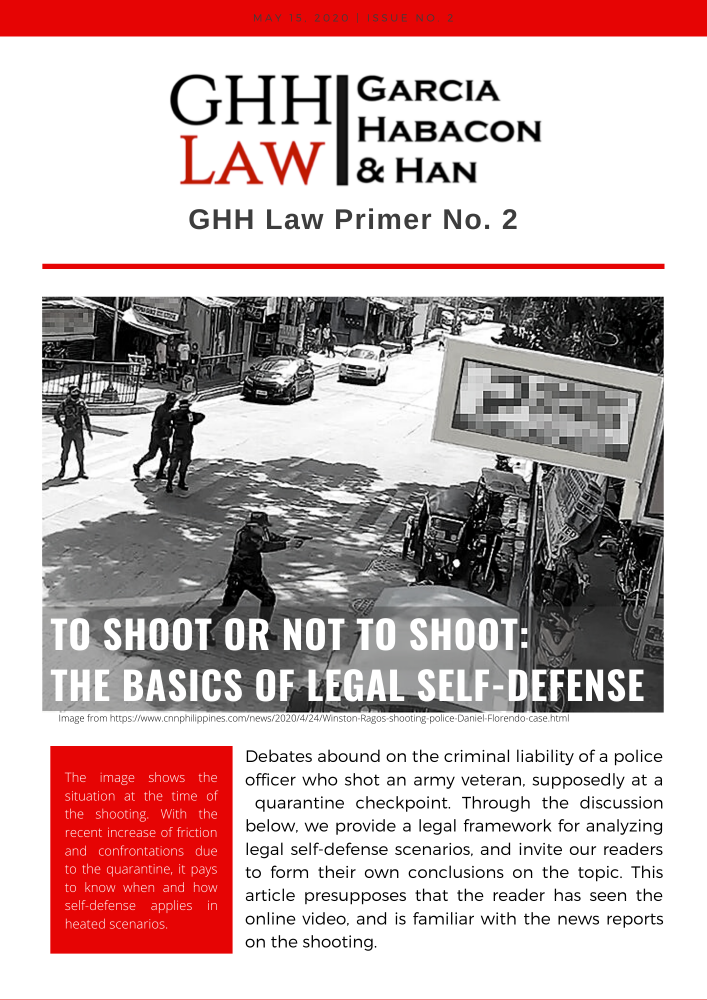 You may download the primer at: https://ghh-law.com/ghh-law-primer-no-2-pdf/. We reproduce the text below.

Debates abound on the criminal liability of a police officer who shot an army veteran in a supposed quarantine checkpoint. Through the discussion below, we provide a legal framework for analyzing legal self-defense scenarios, and invite our readers to form their own conclusions on the topic.This article presupposes that the reader has seen the online video, and is familiar with the official news reports on the shooting.

2. The Elements of Self-Defense

To secure a dismissal, the accused must prove the following:

[a] unlawful aggression on the victim’s part;

[b] reasonable necessity of the means employed to prevent or repel the aggression; and

[c] lack of sufficient provocation on the accused’s part.[1]

Unlawful Aggression is an attack from the victim. It is the primordial requirement of self-defense. There are two kinds: [a] an actual attack; or [b] an imminent attack. It must not consist in a mere threatening attitude, nor must it be merely imaginary, but must be “offensive and positively strong.”[3]

Reasonable Necessity of the Means Employed

The law requires “rational equivalence” between the threat, and the means of repelling it. The law does not require perfect equivalence – merely that the accused acted on instinct, with the tools at his disposal. In determining the presence of rational equivalence, our courts examine all surrounding circumstances, including the gravity of the emergency, imminence of the threat, human nature, and general instincts of self-preservation.[4]

The accused should not have provoked the victim into committing an unlawful aggression. “Provocation is sufficient when it is proportionate to the aggression, that is, adequate enough to impel one to attack the person claiming self-defense.”[5]

We present below some of the arguments for the accused, and the prosecution:

4. Nacnac v. People of the Philippines

[a] the victim was drunk;

[b] the victim was also a police officer who was professionally trained at shooting;

[c] the warning shot fired by petitioner was ignored by the victim;

[d] a lawful order by petitioner was ignored by the victim; and

[e] the victim was known for his combative and drunken behavior.

A police officer is trained to shoot quickly and accurately. A police officer cannot earn his badge unless he can prove to his trainors that he can shoot out of the holster quickly and accurately x x x. Given this factual backdrop, there is reasonable basis to presume that the appellant indeed felt his life was actually threatened. Facing an armed police officer like himself, who at that time, was standing a mere five meters from the appellant, the [latter] knew that he has to be quick on the draw. It is worth emphasizing that the victim, being a policeman himself, is presumed to be quick in firing.

Hence, it now becomes reasonably certain that in this specific case, it would have been fatal for the appellant to have waited for SPO1 Espejo to point his gun before the appellant fires back.

5. Other Points for Consideration

What effect does the mishandling of the victim’s bag have on the accused’s self-defense argument?

Is the existence of the victim’s gun relevant to the accused’s claim of self- defense? Had there been no gun inside the bag, would the policeman have been justified in shooting the victim, just the same, due to a reasonable belief that he was in danger?

Does a violation of police protocols amount to sufficient provocation on the arresting officer’s part?

[9] No supporting jurisprudence yet.